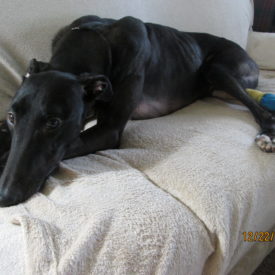 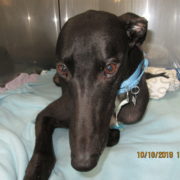 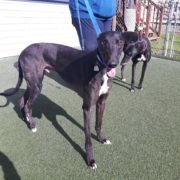 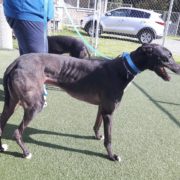 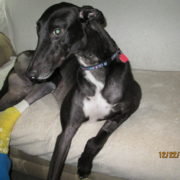 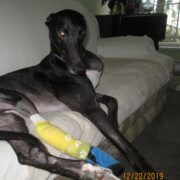 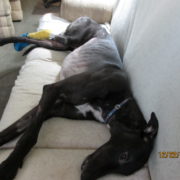 Appeal was born on May 10, 2017. He did not run any races after breaking his rear leg during schooling. Following surgery, the injury was casted to heal. He had recovered and had been released. Vet notes available. Appeal is very energetic.

During the long journey from Alabama to Canada, at a turn-out near Denver, Colorado, Kipur injured his leg a second time. He has been transported to RAPS  in Richmond, BC, where he is being assessed for further surgery or possibly a leg amputation. He is being cared for by a wonderful team at RAPS and is rewarding all of the staff with kisses and wagging tail in spite of his injury. He is eating and sleeping well.

An update will be posted when all of the information has been received. In the meantime Kipur will remain comfortable and loved at RAPS

Kipur is scheduled for his leg surgery on Thursday, December 5th – finally after 21 days of injections, bacterial inspection is all cleared up!

Kipur’s surgery had to be postponed due to the late arrival of synthetic bone material to be used in his surgery. Surgery took place on Friday, December 13th – fortunately no superstitions were present and the surgery and post hyperbaric oxygen treatment were successful. Kipur has been confined to his crate for the past 9 days and as his early Christmas present was released into the general household. His first stop was the couch, and a snooze!

His healing is going well, and he is being a perfect patient, eating and taking all his medications without any complaints (loves the cheese wrapped offerings!). His very short business breaks outside have been met with enthusiasm and quick turnaround to return to his crate…..now at least he will have his favourite couch to enjoy for the rest of his healing time. Boxing Day Kipur will go for a bandage change, an inspection by the vet and another hyperbaric treatment. The vets estimate his recovery time will be around 6 weeks – and then Kipur will be available for adoption into his forever home.

Kipur is now undergoing his 4th and, hopefully, final surgery. Although he has been progressing and healing well, there have been a number of significant complications. The lack of use of the leg for almost 6 months has resulted in a severe contracture of the Achilles tendon. The options are an amputation of the leg or Pantarsal Arthrodesis (joint fusion). NCGL has opted for the latter and that is the surgery he is having today.

Kipur will always have a degree of mechanical lameness even after successful achievement of the joint fusion. We are assured, however, that he will be able to walk and run once he has recovered completely. His leg will always be in a “standing position” even when he is not standing but as we all know, these Greyhounds usually roach with all four legs up in the air anyway!

Once again Kipur’s surgery has had to be postponed – that nasty bacterial infection will just not let go even with all of the antibiotics, monitoring the surgery site every three days and doing frequent bandage changes. The plate, screws and staples have all been removed. Kipur has begun another 7-10 day treatment of special antibiotics with even more scrutiny than before. On the 7th day he will have another procedure  to ascertain if the infection has disappeared and if so he will undergo the Arthrodesis surgery as planned. If not, he will continue another 3 days of antibiotics and will be checked again.

In the meantime, this brave guy has been outstanding through all of this medical nonsense, happily greeting all of the hospital staff, and besides a few vocal expressions of discomfort during the injections, has remained a happy, sweet boy through this whole ordeal.

We will update his progress in a few days. Fingers crossed that this will soon be over for Kipur!

What a lucky dog to get all this extra care by the folks at RAPS.We would also like to thank 48th Animal Hospital for working along side RAPS and providing their wonderful love and care along the way.

Yesterday, our special boy Kipur finally had his surgery, this definitely will be his last. Unable to combat the lingering bacterial infection, it was decided that the leg would have to be amputated. He did well during surgery and spent the night in hospital at RAPS to monitor his initial recovery hours.  As the staff returned to work he wagged a welcome to all who came to look in on him. Later in the morning he was up, walking around for a few minutes and then back to bed to snooze some more. He will return to his foster home tonight where he will join his foster sibling who has missed him during his 2-day absence!

We are saddened on one hand that his long journey has had this result, however, we are happy that he will not have to continue daily injections, the prodding of doctors and technicians on a weekly basis during bandage changes. Now he can heal and begin the next stage of his journey.

Kipur has progressed so well as a tripawd and has adjusted to his new challenges in a remarkably short period of time. For about a week following his surgery, he experienced a lot of frustration, trying to figure out how to do things he had done so easily with 4 good legs. He would stand at the human’s bed, stare at the couch, looking to his human with a look of frustration, wondering how to get up. It was educational watching him figure things out and finally accomplishing them one by one. The final one was, trying to do that wonderful Greyhound stretch, that took the longest, but he now stretches all the time whenever the mood strikes and is completely pleased with himself every time.

Walking on leash is still a bit of a challenge, off balance sometimes and wobbling side to side, but amazingly well considering it has just been over a month since his surgery. He moves pretty quickly and only when he gets a bit tired does he stop, freeze and refuse to move until he is rested. He can be coaxed by a nice ear/eye rub and some encouraging words…of course treats work as well.

Kipur has a lovely personality, is really affectionate and loves car rides. He is young and looks forward to a forever home that will include him in all their activities, He is energetic and loves to be busy…when he’s not sleeping as we all know these Greyhounds can do very well…and often.