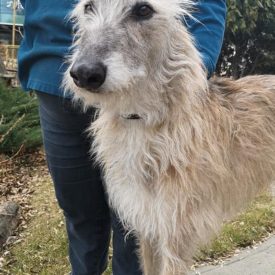 O’Brien has joined the NCGL community recently – stay tuned for more info as we get to know him!

He is a very sweet (and tall!!!) 4-year old Greyhound/Wolfhound Cross.

O’Brien is a sweet, calm, affectionate (likes to lean against you when he wants to be close, or lie beside you and put his paws on you, or his head) and lovable dog that I have had the privilege to spend time with and he has been a joy. It doesn’t matter where I have taken him everyone has fallen in love with him, he is just that special.

Although, he does whine on occasion it is not as excessive as reported, and I understand typical of the breed. He whines when he wants out, for a bit when you leave, for reassurance, when he thinks he is going out for a walk or out in the car, if he sees other dogs and thinks you are stopping at a dog park, when he sees squirrels through the window, and when he is bored.

Each time you acknowledge you hear him and then you tell him enough and he usually stops. If it persists and he doesn’t need to go out, distraction is the key to stopping the behaviour. Get him to go find his toys. Other than when I leave in the morning which was 5-10 minutes (it has gotten better the more secure he has felt) the rest of the time has been easily manageable. If he whines a lot, when others are in the house, then putting him outside breaks the pattern.

After the initial night of anxiety, he has slept through the night. He does like to move around the house, from the bedroom to the living room, and will on occasion whine to let you know he is there, but when directed to go to sleep he stops and does. He will usually sleep 9-10 hours but some mornings if the previous day has been very active, he will sleep even longer.

O’Brien is good on leash. If he sees a rabbit or squirrel in the distance you tell him to leave it and he will. If he sees a rabbit up close, he will pull. You then must stand still to get him to pay attention and be very firm when telling him to leave it. If needed, just hold him at the collar. He will only pull if you allow him to get away with it and that is usually only the first few minutes of a walk if he is excited. Every time you get to a road, I tell him stop and he does and waits. If not told to ‘stop’ he will walk into the road. This is a work in progress. Hopefully, he will learn to stop whenever he gets to a road.

What I do when he is focused on things he shouldn’t be, such as a rabbit or squirrel, is to distract him by doing some training whether it is walking around posts, putting him in a stay, or asking him to look at me so he must pay attention. The ‘stop’ is working, I was recently in an off leash and he was running by me and I yelled stop and he did right away which is huge.

At the off-leash dog park he is fully focused on smells and greeting other dogs so may not come when you call at first; in fact, he may not even remember you are with him for the initial 10 minutes. So, it is best to recognize that he needs some time and space and taking him for five minutes is not fair for him and would be frustrating for you if you expect him come when called. Once he is again focused on you, he will come when called and is happy to do so. However, an off-leash dog park (fenced) is high enrichment and you must allow him time to truly experience it or just don’t go. The second visit he was fully cognizant of where I was and came when whistled. Whistling is a good tool to bring him to you if he can’t hear you call. He will engage in play and chase, but he is never aggressive and my concerns about small dogs has never been diminished.

O’Brien is very calm around the house and is very happy to meet new people and new dogs. He spent 24 hours and 48 hours a week later with an 8-month baby and was gentle and showed interest without being pushy. When the baby was on the floor Brian left him alone and never tried to force himself into the baby’s space. He does greet people gently but may start to jump up if excited a firm no or off and he stops.

O’Brien has had some training. He listens well in the house. He pays attention on walks. What is great is that he is eager to learn and learns fast. With the time, attention and continued training O’Brien will not only be stimulated he will get better and better with responding to commands. He has already learned some hand signals and new words based on the words I use.

He does like to rough house and can get a little carried away. But I believe he can gentle it down if asked too (in fact I have noticed he has). He likes to play fetch but would rather pull or wrestle you with the ball in his mouth than drop it. If you give him time, he will drop it for you to throw. He loves to go through his toy box and pull out the toy he wants to play with. He has even put toys back to get something new. Sometimes he plays by himself other times he initiates play with you. He is not rough when he plays in the house so there is no reason to avoid playing indoors. The more engaged he is the less likely he will be bored or have reason to whine. A toy box with lots of choices is a must for the house.

O’Brien senses when he is liked and responds. He is independent yet wants to be with you. He is happy if you don’t fuss all over him but loves to snuggle. He does not appear to be jealous or in need of constant attention. He happily shares his bed and the couch without growling or indicating he is upset with other dogs and people. Obviously if he did, he would be kicked off the couch.

O’Brien was calm and well behaved at the Vet and the Groomers, I have introduced him to multiple situations from waiting outside a store while I shopped, taking him into pet stores, walking around lots of people. He was only spooked once and that was a large bus or truck that went buy and released their brakes. The only other thing that seems to freak him out is the overhead fans in the house he appears to be very nervous of them.

O’Brien plays well with other dogs but does try to dominate sometimes, he needs to play with dogs his size who can take care of themselves if he gets too bossy. When playing he likes to be the chaser not the chased. He does not show jealousy when in the house and when the other dog looks for attention or jumps on the couch.

The vet noticed he was stiff in the hip, but it is thought that this could be because the day before he had a play date and ran counter clockwise for about an hour on his play date. He still needs a bit of vet work done and needs some help putting on weight.

I have noticed he does bark when outside at times, however, it is usually only with dogs that have shown aggression towards him through the fence. Otherwise he may run the fence, but just as often he ignores people walking by with or without dogs. I have not discouraged the barking as I live in an urban high traffic area and having a dog is a deterrent. It is also good to hear him express himself as it shows he is comfortable. When on a walk we saw an aggressive dog, who lunged towards him from the other side of the street. This dog is the one that he has barked at through the fence, and in fact he barked at the dog when he saw him lunge. I did not discourage this at the time.

O’Brien is a dog that responds best when not constantly nagged or told off. Pick your battles, he will then respond when he hears in your voice that you mean it. If you constantly tell him off my feeing is, he will just ignore you in time. I find if I ask him to come inside and he isn’t ready then standing and calling him is pointless. Give him another 5-10 minutes and he happily come.

We feel that in a calm home, with firm but gentle handling, lots of stimulation, socialization with other dogs and knowing he is loved and safe he will thrive.

O’Brien needs a home with a yard and no attached neighbors (no duplexes, condos or apartments). We are currently looking for a local home for O’Brien.